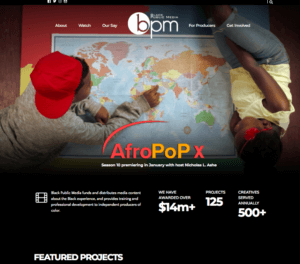 Black Public Media, (formerly The National Black Programming Consortium or NBPC), develops, produces and funds media content about the Black experience for public media outlets including television, digital, radio, and online. Since 1991, Black Public Media has invested more than $10m in iconic documentary content for public media outlets such as PBS and PBS.org. They have also trained, mentored, and supported a diverse array of producers who create content about contemporary Black experiences; and emerged as a leader in the evolving next-media landscape.

Since 1979, the Black Public Media has been incubating and producing stellar works about the Black experience in the US. In an increasingly loud media landscape, capturing new audiences and meaningfully engagement viewers become a real challenge. BPM teamed up with Whole Whale to tap into the power of data and technology to both widen the reach of the organization’s media projects and deepen engagement among loyal and new supporters.

Since 2014, Whole Whale has served as an extension of the Black Public Media’s digital team with the goal of expanding their audience and digital impact. During this time, Whole Whale has increased monthly traffic by 400% and helped to grow BPM’s newsletter by 12k subscribers.

Whole Whale reactivated BPM’s AdWords grant and was able to utilize 100% of the $10k spend by the second month of managing the account. Simultaneously, we built landing pages targeted at BPM’s identified segments: consumers and producers. We reflected the audience segments in the organization’s email lists by reorganizing groups to enable precise communications targeting. Effective AdWords strategy in concert with detailed segmentation resulted in a 300% boost in both email subscriptions and open rate. We have also helped BPM obtain the $40k GrantsPro level of AdWords funding, which continues to result in multiplied impact.

Whole Whale configured Google Analytics and Google Tag Manager in order to properly track user behavior and targeted conversions for programs run by BPM. Being able to 4x the organization’s web traffic is exciting but what we care most about is carrying out BPM’s mission to train and fund producers.

In addition to finding interested producers with AdWords campaigns, we ran targeted social media ads for the organization’s NBPC 360 initiative, an incubator for talented producers telling compelling stories about the Black experience through film. Within a short period of time, more than 1,000 users had registered on the Producers Portal. This is an immensely valuable audience that BPM can continue to engage for future projects.

Whole Whale has provided ongoing digital training to new BPM employees and interns to increase their ability to manage their social and website platforms. Every month, we present new web analytics insights and discuss opportunities to grow their audience. In addition to this, we present an annual social media training for BPM’s national group of producers accepted into their program.