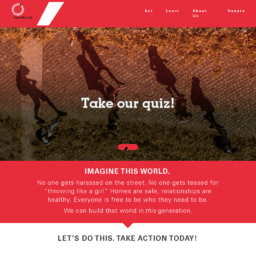 Breakthrough is a global human rights organization working to prevent violence against women by transforming the norms and cultures that enable it. The organization’s multimedia campaigns, community mobilization, agenda-setting, and leadership training equip men and women worldwide to challenge the status quo and take bold action for the dignity, equality, and justice of all.

Breakthrough had been establishing itself in the US for years, but did not have its own website for US operations. In order to carry out its mission, grow its American supporter base, and cultivate a digital Breakthrough Generation, the organization needed a highly customized and action-focused website backed by a strong analytics strategy for tracking impact.

Over the course of two years, Whole Whale worked with the Breakthrough team to build its US site, guide its digital strategy, and increase the digital capacity of the team. Whole Whale also served as a partner in planning and executing digital campaigns and online advertising.

From the start, we understood that a campaign template was essential for Breakthrough to scale its initiatives. This template would need to accommodate both commanding storytelling and crystal clear calls-to-action without creating clutter.

Together with campaign managers, we created a simple and flexible formula that would guide the creation of every campaign. Compelling photos and videos would visually lead the page while highlighting key requests. By design, the campaign template would help Breakthrough staff narrow their focus on a single ask while also letting visitors know exactly what they can do to support the cause.

Aside from designing a satisfying user experience, we needed to build an equally delightful author experience to enable Breakthrough staff to launch successful campaigns. We took out as much of the manual work as possible so that the staff can focus solely on filling in the campaign template with content and calls-to-action. Site managers can also easily create different kinds of content, such as resources and news items, thanks to the custom post types with distinct templates.

From an early stage, we made use of InVision to let Breakthrough staff experience our design in a manner that was as close to a live site as possible. The clickable prototype allowed for critical feedback that normally would not surface until after launch. We also used Sketch, which integrates seamlessly with InVision, to create mockups and quickly make changes based on critique rounds.

As soon as its site went live, Breakthrough staff had a golden opportunity to test out what we had built. They wanted to set up a campaign that asked people to pledge to not watch “the fight of the century” that involved Floyd Mayweather, a known domestic violence offender.

Setting up a campaign, which used to be a complicated process, became a breeze with the new campaign structure. The Breakthrough team was able to set up the #noMayPac campaign from start to finish within a day, which allowed them to strategically launch the campaign just in time for the fight. In just 4 days, the campaign attracted over 4,000 visitors and over 100 pledges.

Post-launch, we continued to work with Breakthrough staff to glean insights from website data and refined their implementation of a MailChimp/Salesforce CRM solution.

Whole Whale’s site redesign was a game-changer for us. It wasn’t just about a pretty website. They nailed everything from high-level strategy to the smallest subtleties of moment-to-moment user experience, enabling us to be the organization we need to be. They are also excellent at project management. They considered new ideas on the fly and adapted to the changing nature of our web build project with skill and ease.

They are loyal, supportive, responsive, forward-thinking, and authentically devoted to our success. Working with them is like having a chief technology officer, data geek powerhouse, and the coolest cheer-leading squad ever all rolled into one.