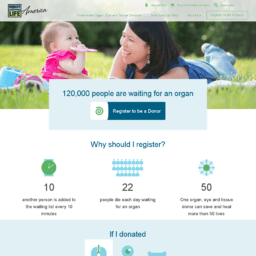 Donate Life America is an alliance of national organizations and state teams committed to increasing the number of donated organs, eyes, and tissue available for transplant to save lives. In 2016, the organization partnered with Apple to bring organ donor registrations to the iPhone Health app for the iOS 10 release.

DLA was pushing initiatives and partnerships forward that were increasing the number of organ donors, but they weren’t measuring their impact and needed to understand where registrations were coming from online. DLA also knew they would need a new, modern website before the launch of their Apple partnership.

Using SEO best practices and building out new organ-specific content pages, we prevented traffic from dropping after the launch of this new site. We actually saw organic traffic increase 5% in the following month and increased the organic organ donor registration rate by 85%. DLA is now the #1 Google search result for “what is organ donation.”

Whole Whale updated DLA to Universal Analytics and implemented cross-domain tracking so we could see the entire user journey from donatelife.net to registerme.org. We also created Google Analytics goals for organ donor registrations and social media shares of those registrations so we could analyze the most effective sources of conversions.

Whole Whale secured the Google AdWords Grant for DLA within a matter of days, brought their AdWords grant spend to 100% within just one week of working together and obtained GrantsPro within six months — the shortest amount of time possible. Since maximizing the grants spend, we’ve been focused on optimizing for impact, continually improving campaigns, ad groups, and keywords to garner more registered organ donors. We also created and built an affiliate strategy that we presented at the Donate Life America 2016 Annual Conference so that local chapters can replicate this success with their own grant accounts.

Whole Whale most recently worked with DLA to build out an SMS initiative in their effort to break the “most organ donor registrations in a day” world record. We created and implemented an SMS strategy to allow the 60,000 people to sign up via their mobile device, making it as easy and simple as possible to register to be a donor.