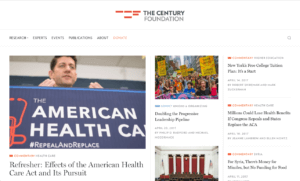 The Century Foundation is a progressive, nonpartisan think tank that seeks to foster opportunity, reduce inequality, and promote security at home and abroad.

A site launch is a crazy time for any organization. The Century Foundation wanted Whole Whale to be there throughout the website process looking out for all the oft-neglected aspects of launching a site: SEO, SEM, analytics, AdWords strategy, and team training. They wanted to make sure that the transition to the new site was as seamless as possible for both their staff and their users.

Whole Whale made sure that The Century Foundation was getting the most out of the major investment they were making in a new site.

Whole Whale made sure to complete a pre-launch SEO audit to determine areas of improvement on the new site. We looked at both on-page and off-page factors, made suggestions for the new URL structure, new content, and redirects so the new site wouldn’t lose organic traffic after the new site launch.

Once the new site was up, Whole Whale completed our post-launch SEO checklist which includes checking for any 404s, making sure redirects are in place, checking site load times, and ensuring pages are optimized for search. In our post-launch SEO report, we found that because their organization took the proper precautions before the site launch, The Century Foundation’s traffic grew 282%.

TCF’s Google AdWords Grant was already maxing the $10k limit each month, but the CTR was below 1% — this left them unable to apply for the the $40k GrantsPro account. Within two months of working together, Whole Whale was able to bring the CTR above that 1% minimum all while continuing to max the account and increase conversions from AdWords. We then quickly applied for the GrantsPro account and were accepted within a few days. We also created a map for migrating all ad URLs immediately post-launch so TCF would not see any dips in spending after the site launch.

Once the new site was live, Whole Whale began A/B testing a few key pages to see where The Century Foundation could optimize the new design for further user engagement. We tested things like title length, color, and image placement. Because we had previously set up scroll depth in Google Tag Manager, we were able to see which iteration enticed users to read further down the page.

Transferring knowledge over to the TCF team was crucial for their staff to continue website success after our partnership concluded. Over a period of two months, Whole Whale held biweekly team trainings for The Century Foundation team (including homework!) at our office. Topics included: Google Analytics, Google AdWords, MailChimp and email strategy, SEO, and content strategy.