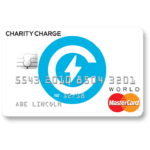 We Interview the founder of Charity Charge, Stephen Garten, about how he got started and how his company is changing the charity credit card game.

Instead of earning miles or bonus points, every transaction with the Charity Charge card allows you to donate 1% cash back to ANY nonprofit of your choice. It’s an easy way to give everyday. Unlike many giving-linked payment cards, the Charity Charge MasterCard issued by Commerce Bank is not limited to a single organization or cause — as with “affinity” cards — and there is no donation-processing fee, so recipient groups get the entire cash-back bonus. Consumers choose target charities when they sign up for the card and can change them at any time.

Stephen has given life to the revolutionary public benefit corporation he named Charity Charge. His journey, both personally and professionally, has been full of difficulties but has ultimately been one of great perseverance and reward. As an Aries, he recognizes that he is loyal and often stubborn, and attributes the birth of his company to his intrinsic refusal to quit.

In 2008, he received an economics degree from Washington University in St. Louis and admits that more of the profoundly educational moments in his life came during his work after graduation. He visited Austin in 2009 and claimed that the city was a, “personification of who he is and who he strives to be.” Several months after his visit, he returned to Austin for good and found a job with the Austin Technology Incubator at The University of Texas at Austin. There, his opportunities for personal and professional growth were numerous and he felt like he slowly gained an education of the real world. After escaping an emotionally exhausting period in his life, he felt like his quest to move to Austin on his own and “grow up” had become a reality.