Yes they can, and we sat down with Emily Stevenson of the Environmental Defense Fund (EDF) to learn how. Compared to direct mail and other forms of communication, email marketing is a very effective and low-cost form of member engagement. Using EDF’s email list of 2 million members and activists as a case study, we spoke with Emily about this organization’s thoughtful and methodical approach to interacting with and soliciting funds from donors through email. In the process, we discovered a few easy ways that nonprofits can use email marketing to increase their donation size.

You can easily personalize your communications by segmenting your members and donors into strategic email lists. EDF uses past behaviors to segment their email list with the following methodology:

By tailoring your emails to a specific audience, you can build trust and loyalty among your members. In turn, your members will be more likely to read your messages if they expect that the content is relevant to their interests.

2. Authentically engage with your members

A donor who opens, reads, and clicks on your email marketing campaigns is more likely to respond positively to fundraising asks. To cultivate and maintain such a relationship, you have to put the donor first.

As Emily explains, “We don’t see them as numbers or ATM machines, or just a record in our file. It’s a real person out there who has a relationship with us. And we want to nurture that relationship and do what’s best for it.”

EDF typically sends 2 to 4 emails per week to their engaged member list. According to Emily, they want to see an open rate of 30%, based on the idea that among those who have recently engaged, 1 in 3 will continue opening and clicking.

Other general tips for building donor engagement include sending 5 times as many emails that are not asks, and spending the most time on donor thank-yous. Donors are your lifeblood, and should always know that they make a difference. After all, the warmer and fuzzier they feel, the better the donor they’re going to be. 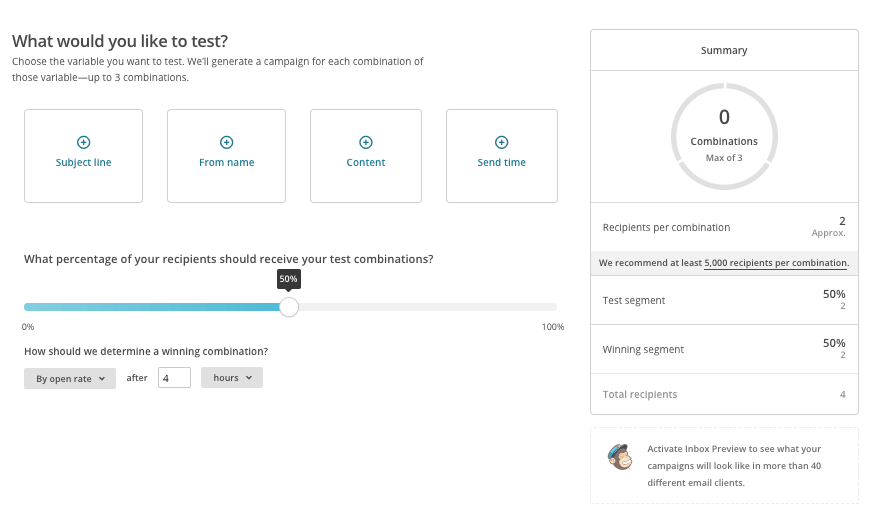 Testing your nonprofit email marketing campaigns is about listening to your audience. Ask yourself why you see a certain result and test your hypotheses. Consider these two tests done by EDF to increase their ROI:

The first test responded to the observation that many higher value donors never gave gifts in response to an email appeal. “We started thinking, well are we annoying them, do they not want to get those emails?” recalled Emily. “This is a very sensitive and important group for us, we don’t want to offend them. So we decided to test sending fewer email appeals.” EDF parceled off a test group of 15%, and sent this test group 4 emails. In the same time frame, they sent the main group of donors 5 emails. Then both groups received 8 emails in the final 5 days of the year. EDF found the result surprising: “We got an overall 8% lift on the group that got that one extra email.”

EDF ran a second test on the gift ticker on their donation forms. “This displays donated gifts in real time for that donor,” said Emily. “In the initial testing, we got results we weren’t expecting. For non-donors, it was increasing their response rate more than completing the donation form, which was our theory. For the previous donors, people either current or past, their response rate wasn’t changed by the ticker, but unexpectedly it increased their average gift size. And we weren’t really sure what was going on.”

EDF focused in on an aspect of the ticker that they realized might be having unintended impact: The ticker seen by donors only showed them gifts within 80-120% of their highest contribution, while the ticker seen by non-donors showed all gifts. Not only had EDF inadvertently tested the social proofing effect on donors, but they had also encouraged them. When they tweaked the ticker, they were able to influence non-donor gift size as well.

Benchmarking allows nonprofits to determine best practices, keep an eye on financial health, and identify opportunities for improvement. You can make these measurements using metrics and key performance indicators (KPIs).

For EDF, the most important KPIs include lead conversion rate (the percentage of new people on file online who become donors in given time period), online donor retention rate, and value in dollars per donor. Basically, EDF wants to measure whether they are growing their active donor list, whether they are keeping members, and whether they are helping donors to give as much as they can. “We look at those on a rolling quarterly basis to assess the health of the overall program,” said Emily.

However, since KPIs do not provide actionable insights, other metrics must also be used. Such metrics are often called diagnostic metrics, and allow you to pinpoint where in the funnel you are losing people and where you can do better. Diagnostic metrics include open rates, click rates, unsubscribe rates, landing page conversion rates, and average gift size.

According to Emily, EDF relies heavily on dollars per thousand emails sent as an important daily diagnostic metric.”It’s a single unified diagnostic metric that reflects all of the stages of the funnel. If someone falls out at any point along the way, it’s going to hurt that number. If you boost any one of those metrics substantially the impacts going to shake out in the dollars per thousand as well.”

At EDF, they calculate the dollars per thousand emails on a rolling 12-month basis, scoring their emails relative to recent performance on this metric. The benchmark for the dollar per 1K emails ranges from $5 to $40.

“If an email comes in at the bottom quartile of all the scores we’ve gotten in the last year, well what went wrong there? Did we send it to an audience that was too disinterested? Was the open rate low? Was the click the problem? The people just give tiny gifts?

Or if something does really well, what went right? What metric did we really see jump up?”

People unsubscribe, they make new email addresses, they forget to respond.  To account for this type of churn rate, prioritize efforts to grow your email list and acquire more members and donors.

EDF believes that email acquisition is so important that they have a full-time staff member dedicated to bringing in new members. Their efforts include different types of advertising, as well as setting up partnerships with vendors and email sponsorships with other organizations. Recently, they “worked out a deal with Grist, where we drafted an email and they sent it to their list on our behalf, saying, “Hey, you should check out this message from our friends at EDF, we think you’d like it. And then anyone who responds to that becomes a donor or a member of our list.”

Nowadays donors have many choices when it comes to communication channels, and everyone has their own preference. For the best results, consider using multi-channel marketing techniques in your fundraising strategy to connect with your donors on more than one level.

To make the most of multi-channel communications, EDF:

Multi-channel is an opportunity to remind somebody all at once that you exist.

A strong email list is the backbone of your nonprofit organization. With email marketing, you can rally volunteers for an important event, summon people during times of critical fundraising, and stay connected with donors and activists. Although we can learn a lot from email marketing strategies like EDF’s, our biggest takeaway should be the importance of relevant, valuable content.

As Emily said, “nobody is upset about getting the email that they think is valuable and relevant. You really have to pay attention to how your followers are responding, if they are engaging with it, or are they unsubscribing, are they writing in to say thanks, I really appreciated this, or are they writing in to oh my gosh stop emailing me. And just give people what they want.”

So, how are you going to give your people what they want? Let us know which of our 7 strategies you hope to improve on @WholeWhale.

With world attention focused on both the environment and the economy, Environmental Defense Fund is where policymakers and business leaders turn for win-win solutions. This leading green group, founded in 1967, has tripled in size over the past decade by focusing on strong science, uncommon partnerships and market-based approaches. You can be part of a vibrant workplace that welcomes diverse perspectives, talents and contributions, where innovation and a focus on results are a way of life. With programs from Boston to Beijing, Environmental Defense Fund is the only environmental group to receive an A rating from Wired magazine.