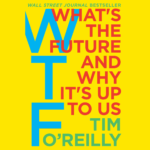 If you’re using the Internet today (and you are if you’re listening to this podcast), you can thank Tim in at least some small part. He wrote the first popular book on the Internet in 1992. His site Global Network Navigator launched as the first web portal in 1993 (and sold to AOL in 1995). He’s been behind terms like “open source software,” “Web 2.0,” and is now looking at how AI and the on-demand economy are transforming the nature of work and the future shape of businesses. This is covered in his latest book, WTF: What’s the Future and Why It’s Up to Us.

Not included on the recording: Olivia and Tim talking too loudly about data in the SXSW Press Lounge during the press interviews for Ready Player One and being asked to keep it down. #sorrynotsorry