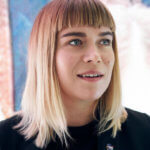 In our final Live from SXSW episode (for 2018 at least), Olivia speaks with Sasha Samochina of NASA’s Jet Propulsion Laboratory. While everyone else was at Westworld, Olivia talks about the Wild West of VR with Sasha, one of the JPL’s Immersive Visualization Producers in Pasadena, CA after her panel, “Let’s Get Real: Practical Uses of Art & Science.”

As the former head Media Producer at the Field Museum of Naural History, Sasha joined NASA full of content, GIFs, and videos for both @NASAJPL and @MarsCuriosity, before entering the world of 360 video, VR, and AR, which she has pioneered for NASA while also creating immersive experiences scientists and engineers on Earth to further NASA’s work in space.

In short, she’s Olivia’s kind of people, and she’s our kind of people, inspiring nonprofits and social impact organizations to think: How can we attach a camera to our own Mars Curiosity Rovers?