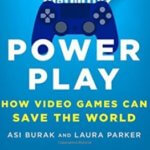 We interview Asi Burak, the author of Power Play: How Video Games Can Save the World about the bold claim regarding video games.
Asi serves as the Chairman of Games for Change (G4C), an influential organization with the mission to celebrate the positive power of digital games. G4C produces the Annual Games for Change Festival in New York City, now part of the Tribeca Film Festival. He is often interviewed by international media, and has been invited to speak at conferences and institutions including TED Talks, Harvard Kennedy School, the Clinton Global Initiative, Sundance, the Skoll World Forum, CES, SXSW, and the US Army War College.