Home » Eats, Shoots, and Leaves Your Site: Data Grammar you should know

Building a data culture starts with building a common language around tech terms. If you can’t communicate about data, how can you expect anyone to look at it? Luckily we are seeing more and more organizations embrace data and get more comfortable digging in to the stuff we geek out over. But we still cringe a little when we hear some of these common data grammar mistakes. How many of these do you make on the reg?

(…and this one applies to lots of other techy two-word verbs, like “sign up,” “set up,” “back up,” “check in,” and “clean up.”)
For the most part, this one is simple: two words = verb, one word = noun.
You can sign up for organization ABC’s mailing list. Organization ABC will then count you among its monthly signups. You can back up your org’s email database by performing a backup. Just please don’t tell me you’re “going to checkin on that this week” – unless Checkin is a new island in the Bahamas you’re traveling to.

“There was a large number of signups this month”
This one boils down to one concept: count nouns vs. mass nouns.
Count nouns are used for objects with discrete borders.
Mass nouns (also called uncountable nouns) are used for objects you can’t count – words that you would never use in plural like “knowledge” or “love.”
You can count the number of sharks in the ocean, so that’s a count noun. You can’t count the number of water in the ocean, so that’s a mass noun.
So back to our question – when do you use “amount” and when do you use “number?”
Amount is used for Mass Nouns.
Number is used for Count Nouns.

Oh, if I had a dollar for every time I heard someone say “less” when they really meant “fewer.”
If you’ve mastered Amount vs. Number, this one is pretty simple. You have fewer of a count noun, and less of a mass noun. You might have fewer signups because you have less traffic, but you wouldn’t have less signups because you had fewer traffic. Ironically enough, you can have more of both – it works for both mass and count nouns (more signups, more traffic, more nonprofit impact!).

Ah, that tricky one that none of us fully grasped in elementary school despite the best efforts of our fourth grade English teachers. Continuous describes something that never ceases – your breathing, your organization’s existence, the drone of the construction site outside your office. If something is continual, it isn’t quite as fluid, but it does happen regularly. You probably don’t have continuous fundraising, but you probably are continually asking your supporters to donate. Your biweekly meetings happen continually, your website is running continuously (we hope!).
This distinction actually wasn’t adopted widely until last century, so no sweat if you’re not completely nailing it.

Is “Data” Plural or singular?

If you’re like me, you groan a little bit every time you hear someone say “what do the data say?” (sorry, boss). Yes, technically the word “data” is plural – the singular word “datum” refers to one piece of data, so “data” refers to “multiple data points.” So, you should be talking about data like it’s a basket of numbers – “let’s share these data with the board.”
That said – these terms have become so widely misused that it is acceptable to refer to data as a singular these days. Our advice: know your audience. If you’re among math geeks, go the plural route and share stories about these data and those data. If you want to communicate with those who are less numbers-savvy (or if you just want to avoid sounding like a know-it-all), “this data” is just fine.
The word data: singular or plural? Click To Tweet

Exponential vs. Logarithmic vs. Linear Growth

“We want to see exponential growth for this donation rate” – Boss
“Do you mean linear growth?” – Me
“You’re fired” – Boss
Everyone thinks they want to see exponential growth. It sounds AWESOME and makes your Board members think the org’s doing great!!!!!
But truth be told, you can’t expect every core metric to have hockey-stick growth. Some numbers – like conversion rates or open rates – you can only hope for slow, steady gains over time, and maybe even smaller decreases as you hit a plateau. Enter your friends: linear and logarithmic.
I’ll let these graphs do the talking. 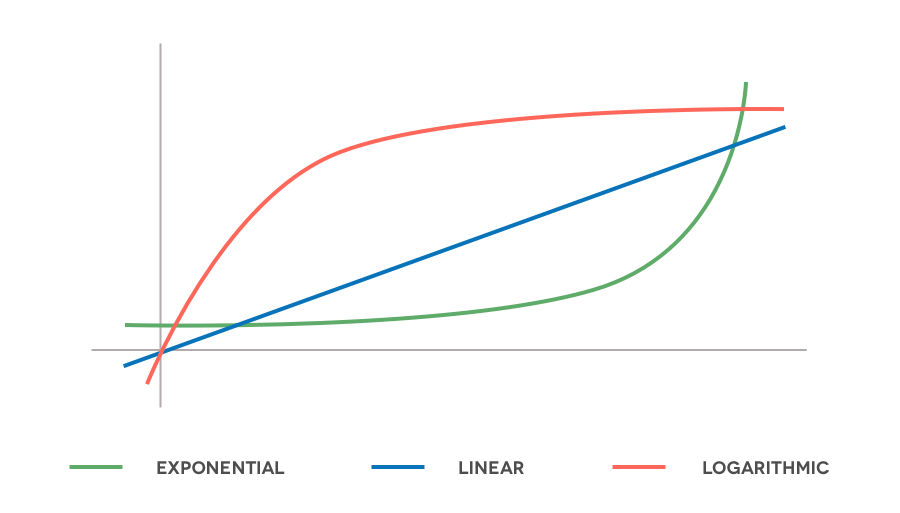 What's the difference between exponential, linear, and logarithmic growth? Click To Tweet (disclaimer: I know this is an oversimplification of the math behind these terms, but we’re talking about the popular use of these terms, not the John Nash version).

That’s all, folks (for now)

Brush up on some of these tech terms and you’ll be talking the talk in no time. Have others to add to this list? Tweet at us. And while you’re at it, here are a few more digital terms to add to your vocabulary.