To someone with a hammer, everything is a nail. This adage is commonly referred to as the Law of the Instrument, and this cognitive bias pushes our solutions towards what’s familiar. So when conversations about mobile strategy come up, the idea of an app hammers the nail. According to data compiled by Statista in 2021, Americans spend 5-6 hours a day on mobile devices. Of that time, roughly 88% of is spent on apps according to eMarketer reports.

It’s not hard to understand why there are over 5 million apps across Google Play and iOS App Store. But while it may seem tempting to toss your organization’s own time and money into that pool, what does it mean to build an app? As a reader of this, you’re probably in a decision phase around how to build out your nonprofit’s mobile strategy towards impact. Perhaps senior leadership thinks you need to invest in an app because a cognitive bias has pushed them toward thinking you can’t keep up with mobile without one.

We’re here to tell you in no uncertain words, without even knowing what your plan is:

In over 99% of cases, investing in a mobile app is the exact wrong investment for your organization to stay competitive on mobile. Here are 3 arguments to support this:

1. Our market is on mobile: The Total Addressable Market (TAM) mistake

You might hear an assumption along the lines of the following: Your organization’s audience all have mobile phones, there is therefore a huge opportunity for all of them to connect with your org on a custom app. Some data that inform this assumption:

The competition for share-of-screen is fierce for apps. App retention rates also indicate that most audiences will be churned through within months. Odds are high that your app will most likely sit in a dark corner of the App Store: Only the most loyal of your supporters (10% of your general based on the 90-9-1 rule) will download the app. Of these users, 70-80% will then delete or relegate the app within 1 month (benchmarks via Localytics).

Maybe your plan is to build a minimal viable option app with just features you need to keep costs down. Here is an idea of where those costs add up:

But open up your smartphone’s app store and go over to the section where you can download updates to your existing apps. Note the version history on whatever updates are available, and note the major changes. We’re willing to bet $1 that, for most of your apps, the version number is high and the major changes are detailed and at times even granular (if we’re wrong, there’s an app we can use to pay you). Each of these updates comes with an average price of $20k a year for maintenance.

You might have heard that building your app to be cross-platform will help with some of these costs. We won’t be the first to say that the simple cross-platform app is a myth.

3. People know our name and reputation, so it’s a no-brainer: The brand loyalty mistake

You can be one of the most recognizable nonprofit names in the world, but does that mean users want to download your app? According to a 2017 report by App Annie, we use an average of 9 apps each day and 30 per month. This works out to roughly one-third of the apps that most users have installed on their smartphones. Apple’s top apps of 2018 were YouTube, Instagram, Snapchat, Messenger, Facebook, Bitmoji, Netflix, Google Maps, and Gmail. Considering the usage numbers for these ubiquitous platforms, are you confident in saying that your app would make this cut? Before you start to consider your fighting chances for making at least the top 30, consider that Twitter is at #20. Per Venturebeat, your chance of making it in the market is less than 1%.

The 1% of nonprofit apps that make sense

Don’t get us wrong: We love apps, and think that there are a lot of apps that nonprofits can use.  But only 1% of 5 million apps on the market make money, and we believe the same holds true for the cross-section of social-impact and apps. Here are 2 nonprofit apps that worked — and why. (Full disclosure, both are former Whole Whale clients.)

This mobile-first approach to turning exercise into donations for charity had good reason for becoming an app. Listen to our podcast interview below.

The United Service Organizations created a tool for their direct internal stakeholders. Not requiring it to grow to hundreds of thousands of users to make sense.

A Data-Informed, Hypothetical Story of HappyApp.org

It’s easy to get lost in numbers and benchmarks, so for fun, let’s play this out: Your organization, HappyApp.org, developed an iOS and Android app very efficiently for $40k. It’s now time to go to market. You’ve set a goal of 5,000 monthly active users (MAU), which seems conservative based on your email list of 100,000, which averages a 20% open rate and 2.6% CTR (benchmark via MailChimp).
The marketing plan is to send 5-8 emails with a goal of netting 10,000 click-throughs to download the app, taking over 1 to 2 months of messaging depending on your frequency and download conversion rate of 82% from the app store (this is the highest conversion rate as seen by Split Metrics ).
By the time 90 days have passed, this entire email marketing plan has resulted in 2,610 users, equaling a cost per user of $17 (not including the app’s ongoing maintenance cost). 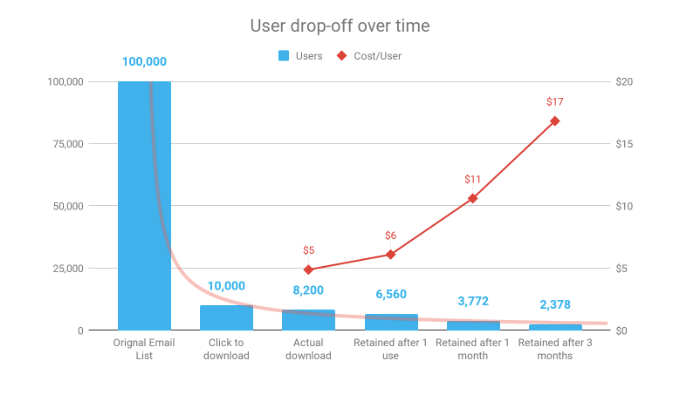 Three months go by, and the executive team looks at the numbers and realizes that in order to reach 5,000 MAUs, more money needs to be spent on marketing. The marketing team is given a $10k budget to buy installs, and runs a smart Facebook advertising campaign, getting a very competitive $1.60 cost per install (benchmark via AppBrain). This drives 6,500 new installations Great! Except… 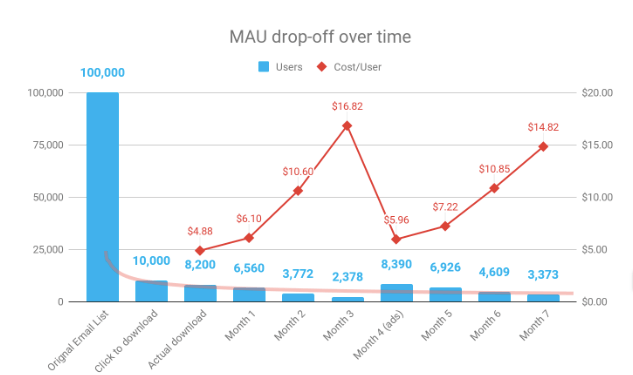 Except that, within 2 months, the same churn rate happens — plus a 10% loss in the core original user base (benchmark via Andrew Chen). This causes the MAUs to drop below 5,000 again, despite $50,000 being spent (not to mention staff time). At this point, the developers come back and say the annual iOS and Android phone updates, plus critical bug repairs, require another $20k. 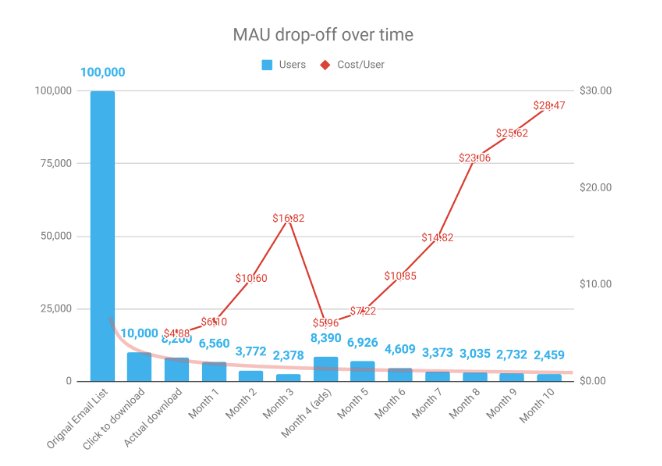 HappyApp.org is now 10 months post launch, having spent $70k for 2,459 users at a rate of $28 per user. At this point, the sunk cost fallacy might start dictating that future investment be spent elsewhere.

Stop. Making. Donation. Apps.
If Google One Today couldn’t make it, another easy way to give on a mobile app is not going to make it without massive investment. Also, donations are now free on Facebook — the #1 app on phones.