Home » Guidelines for Fundraising from Millennials

Many nonprofits may be asking: Who cares about millennial donations? The average age of U.S. donors is 62 (Charitable Giving Report, 2016), so millennials should not be a priority. But let me ask you this: What age are millennials? Millennials are older than you think–nearly half are over the age of 30. If history has taught us anything, people tend to get older over time (crazy, I know). So why wouldn’t a non-profit target a generation that is socially involved and passionate about making a difference?

7.1% of the total donor population are millennials, making this generation the 2nd lowest of the donor population. But that’s only one part of a bigger story. Studies show that millennials intend to increase both their donations and number of charities supported over the next 12 months–that’s higher than every other generation(Blackbaud: The Next Generation of American Giving, 2013)! This means younger folks believe they will increase their income in the future and they want donations to be part of their budget.

The next part of this story has a magic word: retention. Blackbaud’s research division, donorCentrics, found overall online donor retention for nonprofits in 2016 to be 58%. In short, you should target millennials because 1) This younger cohort will increase their donations over time and 2) They will be dedicated to your nonprofit over a longer period of time. This is the long game folks and we will show you how to get those mysterious millennials interested in your nonprofit. 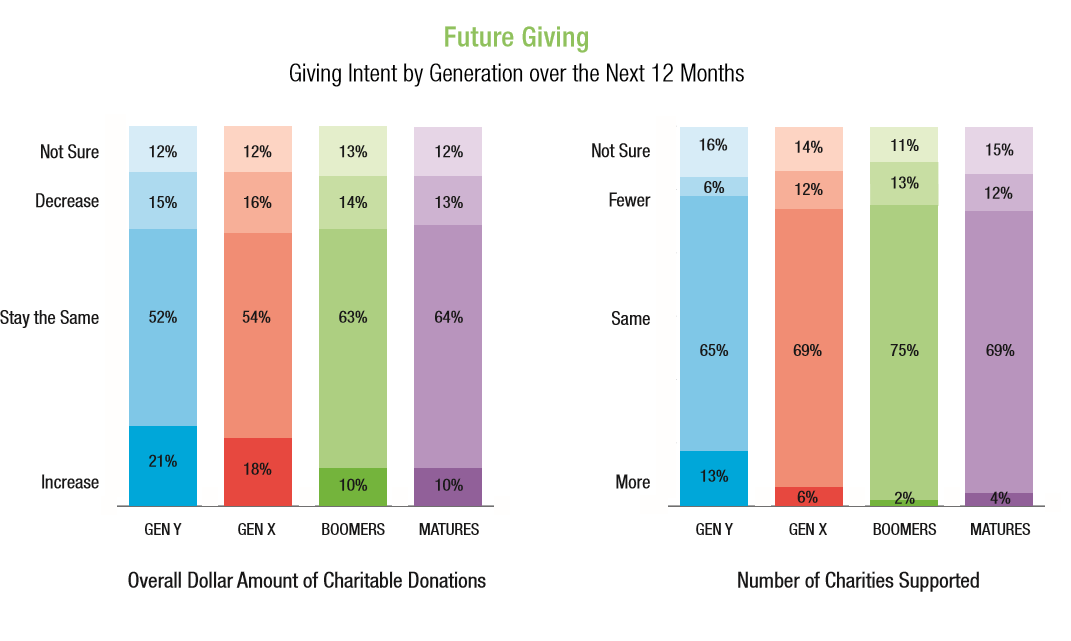 (Blackbaud: The Next Generation of American Giving, 2013)

In 2015, during the Baltimore Protests, the governor of Maryland asked United Way for help.They raised $570,000 through crowdfunding. How? They introduced convenient mobile giving and made it easy for users to become a digital fundraiser. United Way used to market through traditional channels, but by making small changes, they targeted millennial donors and boosted funding. Here is a more detailed account of the Restore Baltimore Campaign. 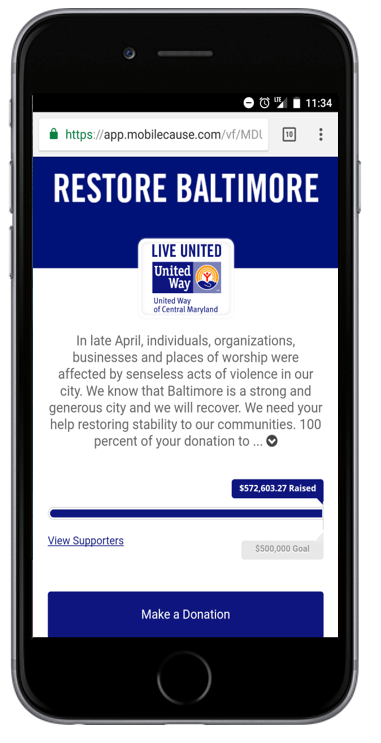 Millennials donate differently than generations before them, meaning a 25 year old doesn’t know anything about stamps. Millennials want to be part of something bigger than themselves and raise money through alternative methods. One of the most popular methods for millennials is to crowdfund, millennials are a generation that asks friend to give. Dan, a 25 year old living in a tiny New York City apartment, would much rather throw a birthday party fundraiser/crowdfund for a nonprofit than send in $50 by snail-mail.

Inspire millennials to donate in alternative ways. Show them examples and blast social media so people can see how easy (and fun) it was for Dan to make his birthday party into a successful fundraiser. Leading examples of this method of Millennial donating can be found on Charity Water’s fundraising page. My personal favorite is David, a guy who raffled off his own face, and let a stranger tell him how to shave his beard.

Retention, Retention and Some More Retention

According to the 2015 Millennial Impact Report, a whopping 84% of millennials made a charitable donation in 2014. In 2017, how do non-profits retain those millennial donors for years to come? One of many tactics is emails addresses! No, I am not talking about another email campaign, but email addresses are a powerful thing in the social media world. With a small ad spend on Facebook ads, nonprofits can target previous donors and use Facebook ads to remind donors that you still need their help. Imagine being able to remind Dan that throwing that birthday was great and he should do it again this year. Here are simple instructions on how to create a custom audience on Facebook ads with the email addresses you already obtained. For more information on Facebook Ads here are 6 tips for an effective Facebook ad campaign.

(Blackbaud: The Next Generation of American Giving, 2013)

As you have seen, Millennials are a promising and engaged audience. This generation is older than you think and one of the most socially conscious generations in recent history. They want to make a difference. They want to engage. They want to inspire. Your nonprofit can show millennials how to change the world (cheesy, but true).