Logging into your Google Ad Grant account for the first time can be overwhelming in terms of, well, new terms.What’s a campaign vs. an ad group? Are ads themselves different than ad groups? And how do keywords fit in? Take a deep breath, it’s all going to be okay.
We’ve put together resources that break down each section of your Google Ads account so you can go from novice to pro in no time. This time, we’re diving into Google Ad groups, what they are, and how to create one.

What is an Ad Group?

An ad group in Google Ads contains one or more ads that all share a set of keywords. This is in between a campaign and an individual ad if we’re going from macro to micro. At the ad group level, you can adjust:

Each ad group carries its own bid, which is the highest amount you’re willing to pay to get the ads within that ad group served. For Search Network campaigns, this number would be your maximum cost-per-click, or Maximum CPC. Note that overall budget, bidding strategy, geotargeting, and start and end dates are all set at the campaign level, not the ad group level. This is important to remember when structuring your ad groups within your Google Ads account.

How to Structure Google Ad Groups

There are many different ways to structure your account’s ad groups. One effective way we’ve found is to organize them around different audiences that you want to reach under a specific campaign.

Alternatively, you can organize them around different services or resources on your website. For example, with Power Poetry, the largest online teen poetry community, has a lot of resources on different types of poetry slams. For this organization, we can create a general campaign called Slams, and then build different ad groups directing to different types of slams hosted on Power Poetry’s website, such as political, social, and educational poetry slams.

Each of these ad groups would then contain 2-3 different ad variations which would all be triggered by the same set of keywords.

How to Create an Ad Group 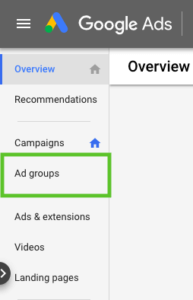 If you’re a Google Ads newbie and would like to dive deeper about how to set up an account from scratch, how to write awesome ads, where to find keywords, and how to measure success within your account, enroll in our three-hour Whole Whale University course. You’ll learn how to make the absolute best use of this grant, which will mean thousands more users taking meaningful action on your site this year. We’ve managed over $4 million in Google Grants and we want to help you get free money too!

Have more questions about ad groups in Google Ads? Tweet us @WholeWhale!