You know the moment: You’re going through your mail when you catch the hint of a red envelope. A snowflake stamp. “So it begins,” you think. You open the envelope and the single sheet of green paper that was clearly at the end of an ink cartridge. “Season’s greetings to our friends and family!!!” it reads at the top.
It’s hard to get that image out of your head when it comes time to recapping the year your organization’s followers. And yet, this is the friends and family that actually wants to hear from you. So how do you send a year-in-review to your supporters that avoids the humblebrag cliches?

Instead of spelling out for your supporters each way their donation dollars kept the needle moving forward for your organization, make your recap dynamic and visual. You can even consider it a preview of what your annual report will look like in the new year.
Email marketing, design, and testing tool Litmus played to its strengths with its year-end email in 2016. The result looks like an infographic for the company’s year in data with a link to its website for more highlights, including what their most popular email was for the year.
Likewise, retail platform Big Cartel had some seasonal fun with its year-end email in 2015, turning their year of accomplishments into a board-game style timeline. 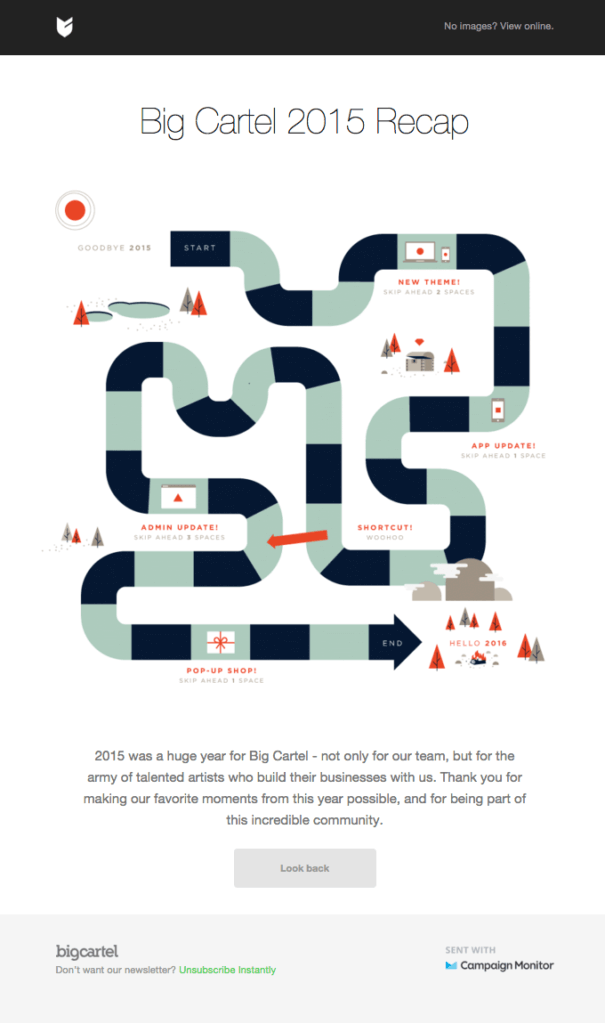 Focus on their accomplishments, not yours

Don’t be like Taylor Swift. Flip the script from “Look what you made me do” to “Look what you did.” Chances are your organization’s successes in the past year were thanks to the support of countless donors and advocates.
The ACLU recently marked the one-year anniversary of the 2016 U.S. presidential election with an email campaign that was all about making the political, personal: They used a first-name call-out in the subject line (“Olivia’s year of fighting back”). They also tailored the language of the body text to focus on supporters versus the organization itself: “You blocked the Muslim ban. You saved our health care. You’ve defended Dreamers and their families.” The campaign ended with a call for users to share their activism stories, bringing traffic back to the ACLU site.
Regardless of your cause, now is the perfect time to say, “Thanks for giving.” 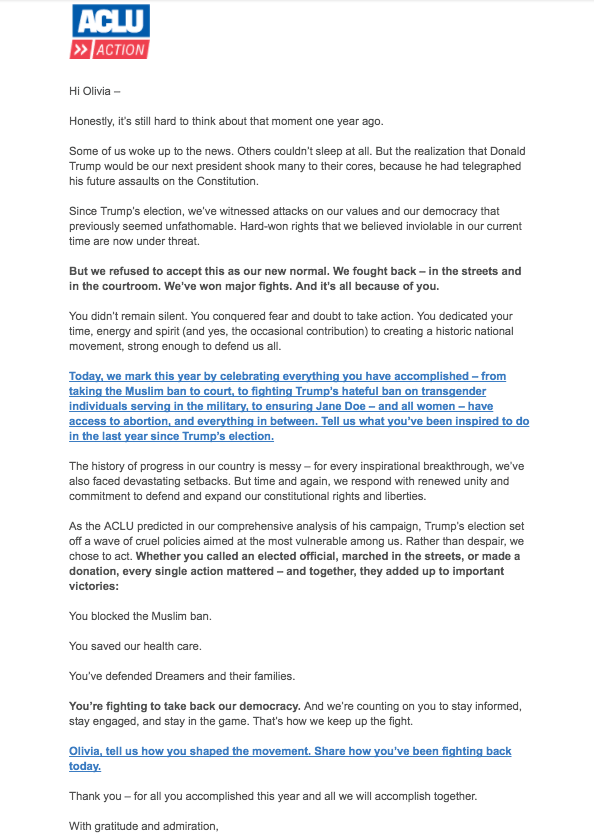 Make them dig a little deeper

Creating an information gap between what you outline in your email and what you say on another platform (i.e., your website) will pique user interest and, as seen above with examples from both Litmus and the ACLU, give users a reason to revisit your site. As Campaign Monitor notes, this information gap has been proven to cognitively induce a feeling of deprivation, thereby motivating humans to act.
So go ahead, make your supporters curious to know what’s in the box. But in order to tear off the wrapping paper, get them to take that one extra step.

Give them something to do

Don’t be afraid to ask for a little something extra in your recap: According to Network for Good’s research, 12% of annual giving occurs in the last 3 days of December.
For users who have donated in the past year, ask them to consider a recurring donation as a New Year’s resolution. For users who have not donated in the past year (or ever), let them know that there is still time to make a difference before the clock strikes 12.
You can even get creative in this department, either with a matching gift or asking users to help crowdfund for a promotion, as charity: water did on a 2015 campaign for the BioSand Filter — adding a little seasonal touch to get people further into the spirit.

Have a holly jolly headline

Don’t forget your subject line and preheader text! Consider how you’d like to frame the theme of your year in review and think of subject lines and preheaders as the wrapping and bows to go with it. Play with the suite of holiday- and winter-themed emojis, focus on the positive highlights of both the year that has passed and the year to come, and remind people that they can still make a difference in your cause sphere. For more on crafting a winning subject line, check out our guide.

…and were making spirits bright. Sign up below to get more merry updates from Whole Whale. (Our friends at the North Pole cross-reference their list with ours.)

Make sure your next giving season is better than the last with our guide to end-of-year fundraising.