When Twitter first appeared, I truly didn’t know what to make of it. Curious to see what the hype was about, I signed up for an account, and as a dutiful liberal arts student, dubiously followed the Huffington Post. I had no idea that years later, working in the nonprofit technology field, Twitter would reign as a communications tool, and an indispensable means to disseminate opinions and promote causes.

As of a year ago, I mainly used twitter as a news aggregator, a place for trusted people to tell me what was going on in the world. As of August 2013, I had roughly 60 followers. (I am not sure how I achieved even this modest sum, as I never made more than a peep on the network, perhaps people were allured by my colorful backdrop and a stunning headshot.)
My boss (George Weiner) took note of this, and decided to juice my account. Thus began my foray into the surreal realm of Twitter bots, where all followers have an account photo, a name and last initial, as well as a random line of text for their profile (think horse e_books, without the prophetic genius.)
Many non-profits see their Twitter following as a stamp of legitimacy. If thousands of people are listening to an organization, it must mean that it is worth listening to, right? Does it matter if these are real people? Really, who takes the time to scan through a followers list to screen for fakes? As it turns out, my friends do.

While idly scanning through my Twitter feed last autumn, I happened to notice that the number of followers had jumped to over 1,000, seemingly overnight. My boss later admitted to me that he had responded to an ad on Fiver, selling 500 Twitter followers for 5 dollars. 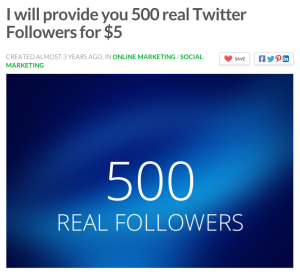 Apparently, it worked. For $10, I was suddenly a legitimate twitter user. A couple of weeks later, a friend emailed me to ask how I had suddenly gotten so popular with robots. These new Twitter friends were suspicious looking. Each of them had only an initial for a last name, and their descriptions read like disparate lines of drivel lifted from an emotionally caustic teenage journal. My friend who pointed this out was knowledgeable about technology, but I realized that it wasn’t hard to see though this façade of followers, and discover that my supposed fan club was little more than a malicious script set free on the Twitterverse, conjuring ‘people’ out of thin air.

I soon learned that these ‘people’ didn’t have very long life spans. What’s more, they weren’t very interested in the things I said – so there were never any Re-tweets, favorites, or replies. Over the following months, they died off in droves, as Twitter continually cracks down on automated accounts.


Last year, Bloomberg Businessweek reported that bots generate twenty-four per cent of all posts on Twitter…Some bots are welcome – on Twitter, there are weather and seismic-condition bots, run by legitimate agencies, that post temperature and earthquake information. But most bots are the equivalent of junk mail, broadcasting e-commerce links in bulk, and both Twitter and Facebook devote considerable resources and manpower to flushing them out.
– Susan Orleans, New Yorker Feb 10th, 2014

We are huge fans of @PowerPoetry, who have experimented with #PoetryWars project that uses an algorithm to analyze and auto reply with poetic ratings for tweets. 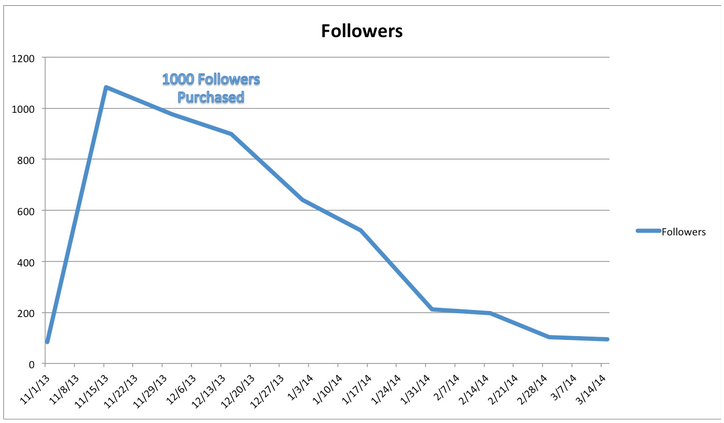 The decline happened in quick drops over 3 months. Fortunately I don’t pride myself on my Twitter reputation, however I could imagine that a non-profit going through this kind of swing would cause some alarm. If you are curious if a competitor on Twitter has done some purchasing you can use Followerwonk.com to broadly analyze their followers for bots.
The reputation game is less than simple when it comes to buying followers. I have to admit I even caught myself tweeting more and considering my profile. One should consider the famed Twitter purchaser, Newt Gingrich when considering making friends with robots.

So, What About Real Life?

This declining chart ends before last week, when I attended a string of conferences and panels. Through participating in the discussion on Twitter, and handing out an exorbitant number of business cards, I managed to add roughly 15 followers to my online hoard. It would be hard to make the argument that this was an easier than paying 10 dollars. My new followers, however have 1 key advantage – they’re real.


Want to learn more about Twitter for nonprofits? Check out our newest Whole Whale University course! We’ll teach you how to drive nonprofit impact using engagement data and how to be your own social media guru.