Google Analytics is one of the most powerful tools for monitoring and analyzing your web data. You can learn a lot about who is visiting your site — if you know the lingo. So let’s start with some of the basics: What’s the difference between users and sessions?

In Google Analytics-ese, Users means the number of unique visitors to your site. Essentially, these are the actual people landing on your website, which means that if someone were to visit your site 100 times on the same device or browser, they would still only count as one user. Google Analytics counts these repeat customers as Returning Users.
Here’s where it gets tricky: One person can still count as multiple users in the right circumstances: If a user visits your site, deletes their browser cookies, and returns to your site afterwards, they are counted as a New User. The same will happen if a user switches devices or browsers on a return visit to your site.
New Users are counted each time a device (laptop, phone, tablet etc) or browser (Chrome, Firefox, Safari) loads your content for the first time.

Sessions in Google Analytics are defined as the total number of visits to your site — including both new and repeat visits. So that same person who visited your site 100 times on the same device is counted as one user, but 100 sessions. However, if that person visited 3 pages on your site in each of those 100 sessions, while this would count as 300 Pageviews (the number of pages viewed on one website), it would still only be 100 sessions.
A new session in Google Analytics starts after 30 minutes of inactivity, or at midnight — so if a user opens your website, walks away from their computer for 45 minutes, and returns to the page after that, it counts as 2 sessions. Likewise, if a user logs onto your site at 11:59pm and leaves at 12:01am, that’s another 2 sessions.

Users vs. Sessions in Google Analytics

The easiest way to remember the difference is to think of bacon.
This is going somewhere, we promise…
Consider the user a person, the sessions the meals a person has in a day, and the pageviews the components of each of those meals. If you have eggs, bacon, coffee, and toast for breakfast, that correlation in Google Analytics is one user (you), one session (breakfast), and 4 pageviews (eggs, coffee, toast, and — yes — bacon). If you had a salad and iced tea for lunch, that would still be the same user, with a new session and two pageviews. Let’s say you decided to have breakfast for dinner — eggs, bacon, and pancakes. Because this is a new meal (session), even though you already had eggs and bacon once that day, they would still count as new pageviews because they occurred in dinner versus breakfast.
Simple? Yes. And almost as tasty.

Where to find Users and Sessions — and what to do next

But where do you find these metrics in Google Analytics?
Click on the Audience Report, then click Overview. Here, you can see a list of important metrics including Users, New Users, and Sessions. 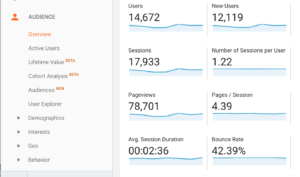 Although they appear in the same area and can often display similar numbers, you can see now what the differences are.
Now that you know the basics, we can move on to when to use each of these metrics and how they can help your nonprofit better understand its audiences and site traffic. Let’s start with the Users and New Users metrics. To differentiate between New Users and Returning Users, go to the Audience tab, click on Behavior, then click the New vs. Returning report. Here, you can see which users are new and which are returning, the bounce rate and session duration for each group, and more.

After your organization runs a paid advertising campaign or boosts a social media post to raise awareness beyond your core group of supporters, the new users metric compared against Source and Medium is helpful in indicating how successful these efforts were at bringing in new users.
The returning users metric can indicate how loyal users are, and whether your site has content that engages them over multiple sessions. You’ll want to increase both new and returning users over time to make sure you’re leveraging impact and driving in more conversions at each level of the funnel of engagement.
Now let’s talk about sessions: Looking at the sessions metric is a good way to gauge how your site is doing overall. An increase in sessions can be another indicator of quality growth for your website if those sessions are resulting in more goal and event conversions for your organization.
The sessions metric can be useful when used against goal and event conversions to see if users are getting caught in one stage of the funnel. For example, if your sessions increased by 200% year-over-year, but your goal conversion rate has remained the same, this may be indicative that either a key landing page is not getting the right traffic or something isn’t functioning as it should, such as an email sign-up form or donation link.
Becoming fluent in Google may seem overwhelming, but have no fear! This is just one of the resources we have on Google Analytics lingo along with other analytics topics. You’ll be a master in no time. You can even take it a step further with our course on Google Analytics, produced in partnership with our friends at TechSoup.