For nonprofits and social impact or justice organizations, there are more ways than ever to contact our representatives in Congress. Thanks to technology, we can Tweet, Facebook message, comment on YouTube, tag on Instagram, call (even without a phone), fax (even without a fax machine), and even hail a Lyft to Capitol Hill to be there in person. If history is any indicator, this increase in communication platforms with access to Congress will continue to increase.
At Whole Whale, we work with nonprofits on using a marketing funnel model to measure supporter engagement at four levels: Awareness, Interest, Engagement, and Action. Measuring impact in this way allows us to track desired outcomes at micro-levels, and also segment different actions based on what level of engagement they demonstrate: A user who spends 5 minutes on an organization’s website is great, but that action is less important than a user who signs up for that same organization’s email list. And none of this matters if those email subscribers aren’t converting into donors.
Using this framework, we can also segment out audiences and create specific goals for how we track engagement with our cause and organizational mission and vision. This has more increasingly begun to include Congressional engagement. Here’s a look at how we can measure nonprofit effectiveness on the Hill.
Digital advocacy goes beyond a catchy hashtag: How to measure real change with the Congressional Marketing Funnel by @WholeWhale. Click To Tweet

As the New Yorker wrote in 2017, the first telephone was installed in Capitol Hill in 1880 and was (reluctantly) answered by the House doorkeeper before a 100-line switchboard was installed in 1898. Now, there are thousands of staffers in charge of listening to and logging messages-slash-complaints from constituents.
Contacting Congress in the 21st Century is more decentralized, with what the New Yorker describes as “five hundred and thirty-five small businesses that together form the legislative arm of government.” As such, “their way of dealing with constituents can differ as much as their politics.” What has been standardized, however, is how each small business handles constituent relationships. All messages that come in for representatives are collected into a constituent-management system, most often Intranet Quorum, produced by Virginia-based tech company Leidos (which claims to be in 65% of all Congressional offices).
As of 2018, 97% of all representatives on the Hill are on Facebook and 100% are on Twitter, with other platforms like Instagram rising steadily according to research from the LBJ School of Public Affairs at the University of Texas at Austin. Engagement is poised to only grow in the 116th Congress between 2019 and 2021, especially with newly-minted representatives like Alexandria Ocasio-Cortez giving social media lessons to their colleagues.

How Messages are Measured and Managed

Because we tend to manage what we measure, we can learn a lot from the tools used by officials to monitor messages. For instance, if an alien were trying to figure out how people used cars only based on the dashboard: They would see that humans in cars care about their current speed (MPH), the stress on the engine (RPM), and how far they could go (gas gauge). Using this logical approach, these are actual screen grabs from Intranet Quorum. 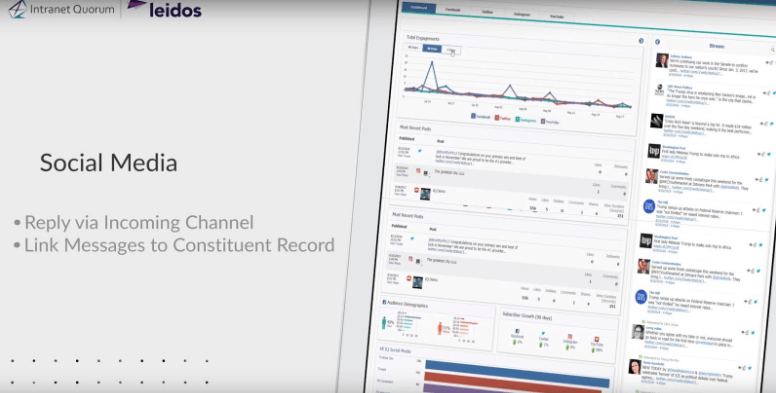 Social media screenshots show that staffers are looking at volume of messaging over time and can connect those social profiles to constituent records — the latter is particularly important as congressional staffers often acknowledge that they selectively ignore social media messaging because it’s too hard to discern constituents from non-constituents. This absence of guardrails became especially pertinent in November 2016, following the results of the U.S. presidential election, as former staffer Emily Ellsworth Coleman wrote, aptly enough, on Twitter.

Evidence on the other side of the proverbial aisle, however, suggests that this is not always the case. According to 2015 research published by the Congress Management Foundation, 80% of the 200 participating senior congressional staffers said that 30 or fewer responses to a representative’s social media posts are enough to get their office to “pay attention.” The survey also indicates that staff tend to review only those reactions posted within the first 24 hours.” The CMF research also indicated that representatives were swayed more by personalized emails, personalized letters, and editorials in local newspapers than telephone calls.
The takeaway: If you’ve seen how one Representative handles the voice of constituents, you’ve seen… one Representative. What matters to a senator’s office in New York may not be the same for a House member’s office in Minnesota. Generally speaking, however, the more personal and more time that goes into the outreach, the better the chances the message will influence.

How Your Supporters Can Contact their Representatives for Your Cause

We looked at 4 key ways to successfully contact congress earlier this year. These are the top methods that activists are currently using to make sure their messages are being heard, and include:

To this list, we can also add a few other tools that we’ve considered but find less effective to bring to scale for nonprofits:

As evidenced above, motivating your supporters to contact congress on your behalf is the other part of the equation. We delve into that more in the same article that covers our 4 picks for contacting congress, considering B.J. Fogg’s behavioral model. The upshot: The more difficult your request is for your supporters to contact Congress, the stronger your motivation and easy ways to make those calls your request has to be. Otherwise, it will fail to rally people.
But once you’ve rallied people, how do you rally Congress?

Measuring the Success of Activism: The Congressional Funnel of Engagement

At Whole Whale, we rely on the marketing funnel logic model for measuring nonprofit impact. We can also apply this model — and metrics to define success at each level of engagement — to successfully lobbying congress for your cause.

At the top of the funnel is awareness, which in this context we can define as your supporters contacting their local representatives on your behalf regarding your issue or cause. The goal here is to create staffer awareness through cross-channel communications that are sent by your supporters. You can measure the effectiveness of this strategy through:

At this point, your content should be gaining congressional notice. While this is hard to measure precisely, we can quantify engagement by the number of:

Ideally, congressional representatives or staffers will respond to your content in an official capacity. This might be measured as:

Congratulations: If you’ve made it here, your issue has entered the discourse, either through proposition of a bill or discussion on the floor. The metrics here vary depending on the individual goal, but you can track by representative action by topic on the floor, votes, or proposed bills.
It's 2019 and @AOC is teaching her fellow congressional reps how to use Twitter. Here's how to meet them on their level — and affect real change. Click To Tweet

In the words of Spike Lee, “The 2020 elections are around the corner.” Congress will be paying extra attention to the voices of constituents. As such, this is the time to start planning messaging campaigns to make sure the issues that matter are surfaced to those in power.
Use this in good health, and remember: Consult your comms team, and results may vary. But to give you a head start, we have one more resource for you:


Politweets by Whole Whale is a free tool you can embed on your site and customize with messages for supporters around the country to send to their reps. You write the Tweet, they do the sending. Learn more about installing Politweets on your organization’s website.