“[H]ow do you feel about using # (pound) for groups. As in #barcamp [msg]?” With this simple question posed on August 23, 2007 by Twitter user Chris Messina, the hashtag was born. In the last 12 years, it’s been used for everything from product launches to movie titles.
Social impact has also seen a lot of success with the right hashtags — which are now ubiquitous on Twitter, Facebook, Instagram, Pinterest, and beyond. A 2018 Pew Internet study found that, 5 years after the hashtag #BlackLivesMatter was coined, it had been used nearly 30 million times on Twitter — an average of 17,002 times per day, with spikes around key events in the news cycle. 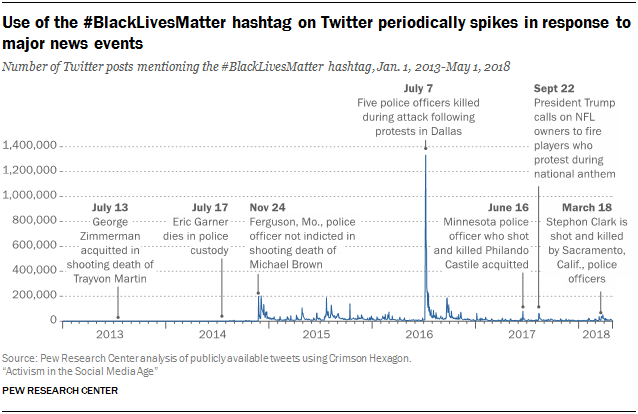 Cynics may argue that hashtags are simply slacktivism without affecting real change. However, Pew data suggest that 69% of Americans feel social media platforms are important for getting politicians to pay attention to issues.
For nonprofits, that’s a valuable sentiment to capitalize on. Many organizations have done so already for campaigns big and small. We’ve monitored a number of these at Whole Whale, and have noticed the following trends that help a nonprofit hashtag campaign succeed. Read on for 11 simple tips.
How do you make a nonprofit hashtag campaign that #nailedit instead of being a #fail? Gotta start with #goals. Click To Tweet

Having a hashtag campaign (or any campaign, for that matter) without goals is like chasing a nonexistent tail. Define the success for your campaign so  you don’t get lost in vanity metrics and can measure your social media ROI. Some goals for a hashtag campaign could include:

Example: At Whole Whale, we worked with our friends at the Lung Cancer Foundation of America on an April 1 campaign called Cats Against Lung Cancer. We knew we wanted to do something lighthearted for April Fool’s Day to offset the often heavy topic of the world’s deadliest cancer. Plus, the LCFA team has a terrific sense of humor. But that wasn’t enough. In order to measure whether or not this was a good use of anyone’s time, we needed to have a goal. In our first year, we decided to focus on raising awareness through top-of-funnel conversions. Our goal was to help users find some key resources on lung cancer symptoms and research once they landed on the Cats Against Lung Cancer page.
Other organizations have effectively used hashtags to increase and measure awareness. Nonprofit public health organization truth does this with its efforts to eliminate tobacco use with campaigns like #BigTobaccoBeLike and determines effectiveness both in goals around video campaign views and sentiment measured around specific questions. In the case of this campaign, they polled young people before the campaign launched and months afterwards. In this time frame, there was a 55% increase in those who agreed that even occasional smokers were supporting Big Tobacco.
Beyond awareness, nonprofits have seen success using a hashtag campaign towards bigger actions like donations, most notably ALS #IceBucketChallenge.

Fact: Your donor demographics may not align with your followers on social media. Use in-platform analytics on Facebook Analytics for both Facebook and Instagram, Twitter Analytics, and YouTube to understand the age, gender, and location of your followers. On LinkedIn, you can analyze your followers by location as well as career-specific data.
Cross-reference this with your Google Analytics demographics, bearing in mind that age and gender in Google Analytics are best-guess approximations. The important thing here is to get a sense of who follows you on social media, who goes to your website, and who takes important offline actions. If your donors are typically women age 45+ and your followers on social media are in the 25-35 range, then you may want them to do something besides donate. Or you can cultivate new donors by asking for smaller donation amounts. Former Whole Whale client Concern Worldwide US, for example, runs the Concern Leadership Network. This is aimed at younger donors whose loyalty is cultivated over time with Giving Tuesday campaigns, networking events, and crowdfunding initiatives. They’re also a key audience for Concern on social media.
All of this will be useful in determining the audience you’re speaking to in terms of the overall language you use on top of your specific call-to-action. Speaking of…
Pro-tip: Some of the most successful social impact hashtag campaigns are hashtags that also serve as a CTA. #OptOutside, #BeFearless, #BringBackOur Girls… Click To Tweet

Some of the most effective hashtags act as their own call-to-action. Consider organizations like the Keep A Breast Foundation, whose hashtag campaign #CheckYourSelfie is a play on selfies, the common phrase “check yourself,” and a way to reach younger audiences with the important message of self-screening for breast cancer.
When creating campaigns that scale, make the ask as easy to understand and to do. This is crucial in terms of activating users. With a simple pose demonstrated in other posts, anyone can hop on the #CheckYourSelfie bandwagon by taking — you guessed it — a selfie.
Here are a few other examples of hashtags that also serve as CTAs:

Be clear with how your hashtag fits in with the larger goal. The minute a hashtag gains steam is also the minute that its meaning becomes diluted and misinterpreted. The #IceBucketChallenge is a good example of making it easy for people to participate at scale without full context: Initially the Ice Bucket Challenge was either donate or dump a bucket of ice water over your head. Many people lost the thread and donated in order to participate. Fortunately, that’s a good mistake for ALSA.

Meet your audience on their level with your CTA

Once you’ve defined your audience (see above), you can then make the right ask of them based on your campaign objectives. The World Wildlife Fund’s #LastSelfie campaign was one of the most popular nonprofit social media campaigns, in part because it gave Snapchat users a call to action that related to what they were doing already on the app: Screenshot the snap and share it to Twitter or another platform. Within one week, 50% of all active Twitter users saw related posts. WWF reached their monthly donation target in 3 days.
Asking users to take a more involved action, like dumping a bucket of ice water over their heads and filming it, is going to require more motivation and has a higher likelihood of not working. Asking your supporters to post a selfie, on the other hand, is a much easier ask and requires less motivation.

Research what worked in the past

Focus on your cause vertical as well as other nonprofits that have stuck the landing with their campaign-specific hashtags. We like to scan the Shorty Awards for Nonprofits for inspiration from previous winners and nominees.
Hasthagify is a good way to understand how social media users are talking about causes: Analyzing #marriageequality, for instance, we can see that #LoveIsLove and #LoveWins are two of the most popular related hashtags. We’d bet that using “love” in your own marriage equality hashtag campaign would be a good starting point. You can also track usage over time to see if there was a spike in usage (say, around the Tony Awards in 2016 when Lin-Manuel Miranda famously said “Love is love is love” in response to the Pulse Nightclub shooting that had taken place the night before in Orlando). 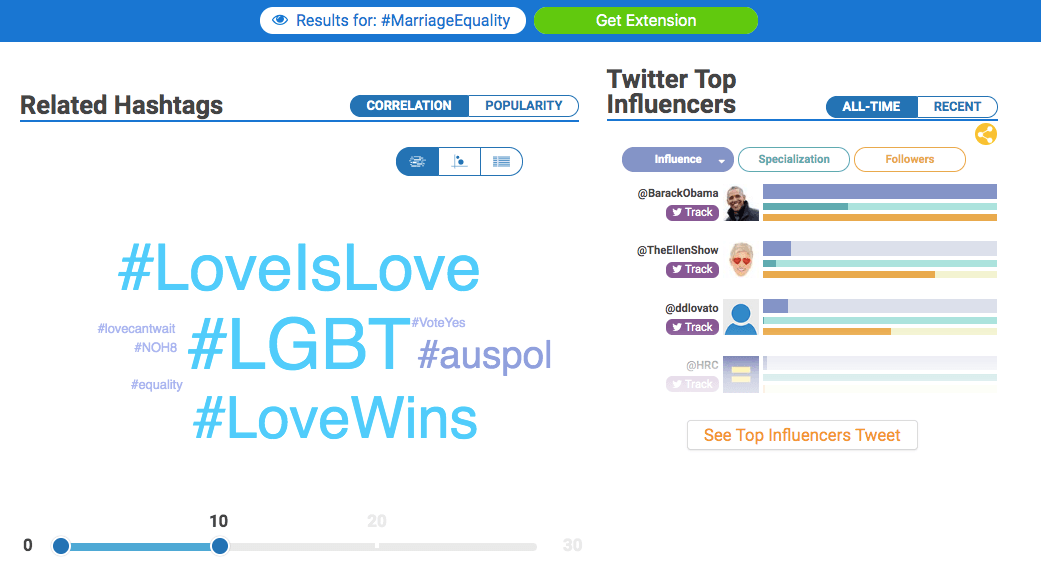 Speaking of Lin-Manuel, if you have any influencers in your space, monitor the hashtags they use regularly.
Check, too, to see if your competitors have done any campaigns recently. What worked? What didn’t? What should you avoid doing based on what they did? Which hashtags do they use that you can also use?
Dear nonprofits: #This #is #not #how #you #hashtag. Click To Tweet

If you aren’t using strong visuals on social media in 2019, that should be your first #goal before you start to #hashtag #all #the #things. The right image, video, gif, or artwork will also do a lot of the driving for your campaign. Check out our guide to making amazing graphics (even without a design degree) using Canva for nonprofits. Or check out our top 3 Facebook video mistakes (which also apply to Twitter, Instagram, and LinkedIn).

Pair your hashtag with what’s trending

Use the What’s Trending sections of social media platforms or a tool like Sprout Social to monitor which hashtags are trending. Some hashtags have seasonality — such as #GivingTuesday or #Oscars. Hashtags that reliably happen once a week can also be used to cross-pollinate your hashtag. Some of the most popular:

Here’s a giant day-of-the-week hashtag guide from Hootsuite with volume and examples.
A note of caution on this: Don’t be tone deaf. If a natural disaster strikes and you aren’t running your campaign for that exact disaster’s relief efforts, it’s a bad idea to try and hijack the message for your own purposes. Also, look for hidden messages, double meanings, and other potentially embarrassing situations that you can neatly avoid with Urban Dictionary.

Sweepstakes and contests for people who opt into using your hashtag breed engagement. In 2015, when the Brooklyn Academy of Music hosted the Mariinsky Ballet for a run of Swan Lake, they encouraged users to post a selfie using a mask that was tucked into their program: Black on one side, white on the other. Posts tagged #swanface were entered into a raffle for a limited edition poster from the performance. I am definitely not still bitter 4 years later that mine didn’t win. (Also, remember when we all used the Toaster filter in Instagram?)
Tools like ShortStack offer built-in templates for running hashtag sweepstakes, which can also help in building out your supporter database.

Don’t blow your budget on boosting posts, but consider throwing some money into a smart social advertising campaign that gives your organization the signal boost it needs.

Get your MVP followers and super-users to support your efforts with their own posts. Same for your staff, volunteers, and board members. The reason the ALS Ice Bucket Challenge succeeded was because of the peer-to-peer efforts.
If your hashtag campaign is part a larger press outreach by your communications team, make sure that your hashtag is included in the press release as well. Depending on the nature of your campaign, it may even be worth its own press release.

Hi. We’re Whole Whale. If you haven’t met us before, you should probably know that we’re a little bit data-driven.
Hashtag campaigns are the perfect opportunity to see how your website traffic is affected by your campaign — or if you want to track in-platform engagement, you can check engagement as well as impressions using in-app analytics or an aggregator like Sprout Social. If you’re using any additional tools like ShortStack or Hashtagify, you can measure progress there as well.
Remember, too, that small wins are still wins, and can give you some vital data to work with for your next campaign.


Want to take your hashtag campaign to the next level? Politweets by Whole Whale lets you create a free Twitter advocacy tool for your website, allowing your supporters identify their US representatives and then tweet them your custom message. It can take fewer than 30 tweets on one topic to get the attention of a congressional staffer. Give it a test run in just a few minutes at politweets.org.