This year, Whole Whale predicts that $605 Million will be raised on the day, read more about the stats and predictions for GivingTuesday 2020.

This epic day of giving, created by the 92nd Street Y, now managed by GivingTuesday.org, has followed Black Friday and Cyber Monday in the U.S since 2012, and only continues to grow in reach and influence. What sets Giving Tuesday apart is that the sector is trying to build a new unselfish social habit, which means it will take more nonprofit and company participation to compete with the existing holiday corporate messaging.

Learn how it all started while you read this

In 2018, Giving Tuesday crossed the $1 billion mark, raising over $400 million on the day. In 2019, $511M was raised on the day of giving. This is a 28% increase from 2018. Whole Whale analysts will be creating an estimate in the fall — read more about this and other facts about #GivingTuesday.

There are tons of #GivingTuesday guides, playbooks, toolkits, examples and stories so we decided to try to summarize some of the best Giving Tuesday ideas we’ve seen as well as adding our own.

Want more tips from the GivingTuesday experts? Check out our course with Chief Whaler George Weiner and GivingTuesday’s own Director of Digital Strategy Kathleen Murphy. You’ll learn best practices and get immediately-usable tactics for your campaign. Enroll here.

Have an internal point person executing the plan and creating a wrap up analysis with learnings for next year (this doesn’t have to be your classic fundraising person either). Have them recruit a team of volunteers and super supporters from your network. Go the extra step: Give this group a title like #GivingTuesday Advisory Counil (making this a bonus Giving Tuesday idea).

Create a public calendar invite on Google (and others) to remind your audience to take action on Giving Tuesday. You can add specific instructions and links in the invite and start sending it out in emails to supporters weeks before the actual day. This will give you a way to give an early action that will then show up on their calendar, phones, and even e-watches, increasing the chances people will act!

New volunteers will be evaluating new nonprofits based on rating sites. Check to make sure you are updated in places that matter: Guidestar, CharityNavigator, GreatNonprofits, Wikipedia, and GlassDoor.com.

Participate, but don’t let this take too much time! Manage expectations on returns for your work based on goals your team sets.

This should happen well before #GivingTuesday (again, early and often). We’ve seen increases of 20% and higher for every page we have A/B Tested for our Whole Whale clients. Go through the process on mobile and donate $5 to make sure the donation flow performs correctly. Here is a list of low-cost donation platforms to consider.

Promote your Giving Tuesday campaign on your site’s homepage, and consider pop-ups across subpages so that all visitors will know about it. Create a focused giving page just for #GivingTuesday and promote that exact page — don’t make people click around to find your donate button.

Matching gifts are to #GivingTuesday as deals are to #CyberMonday.  Create urgency by creating 24-48 hour period where donations will be matched. Use Double the Donation’s #GivingTuesday Matching Gift Pages for free.

Use #GivingTuesday as an opportunity to rally existing supporters to ‘friend raise’ and pull in their friends by donating themselves.

10. Pull in a celebrity appearance

Thanks to sites like Cameo.com, you can now find and pay for a celebrity to create a custom message for your campaign. We talked with the Cameo support team and as long as your company uses the business promotional list of celebrities here you can use it for a GivingTuesday promotion. This means your GivingTuesday call-to-action could be delivered by folks like: 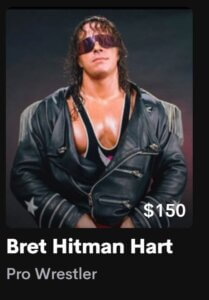 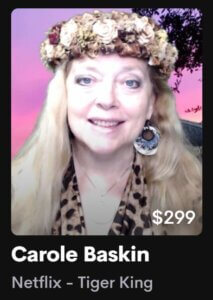 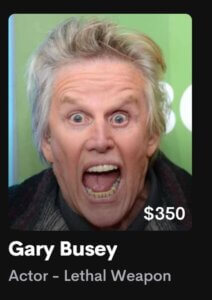 This is just the start of the race — not the final sprint. Think about positioning your Giving Tuesday campaign as participating in a social movement to combat the shitty commercialism that has taken over one of best excuses to eat leftover pie for breakfast.

Companies are just like people and may have an employee giving program that you can tap into or find matching gifts through. America’s Charities is a leader in running workplace giving campaigns and have some great tips for #GivingTuesday corporate giving.

13. Use social norms and price anchoring.

The average donation amount in 2017 was $134 (Blackbaud). Make this subtly known on your donation form options and copy. Yes, we know averages are wildly misleading — but it’s for a great cause. Geek out on more influence tactics via Robert Cialdini.

Schedule out your giving reminders across all major platforms using HootSuite, Sprout Social, Facebook scheduled posts, and your email scheduler. Try to analyze peak times your followers are active — we like FollowerWonk for analyzing followers on Twitter — in order to hit the most people at the best time.

Will your Giving Tuesday money go towards a new program or needed equipment? Giving transparency can help your story when getting ‘fence-sitters’ to convert. Lakeside Chautauqua managed to raise $105k by focusing on a local restoration project in their community.

16. The best Giving Tuesday ideas are not in the room.

Look to your supporters for great fundraising stories that you can bring national attention to. The Cystic Fibrosis Foundation did this well by finding a 10-year-old who was selling barrettes to raise money to help her friend struggling with the disease.
The best Giving Tuesday ideas are not in the room. Find great fundraising supporter stories to amplify. #GivingTuesday Click To Tweet

Look, if the generous profiteers at Kmart can start Black Friday at 6am on Thanksgiving, you can open your virtual doors early and count donations for your campaign starting Monday (or earlier). Feel free to use this joke when you do it (light humor: another bonus Giving Tuesday idea).

19. Offer a message from your constituents.

Plan a YouTube video with recorded “I gave because” from your super supporters – with donate button. Release it on Monday and throw some ads behind it. Here is a great one the Michael J. Fox Foundation created from supporter letters.

Well, it doesn’t have to be a dunk tank, but you get it. This idea is inspired by our friends at DoSomething.org, who put CEO Nancy Lublin and COO Aria Finger in a dunk tank to hit $1 million for their annual event. We were there, it was awesome. Pro-tip: Combine this with #7 (making this yet another bonus Giving Tuesday idea).

Create temporary hand tattoos with your logo + #GivingTuesday or #Unselfie. These can also be used as incentives for early giving or participation, especially when it comes to mobilizing your core supporters. Here are the cheapest ones we found — 1000 for $100.

23. Be a part of the #GivingTuesday conversation.

Be hyperactive on social media and consider running ads at 10am, 12pm, and 8pm  when donation activity peaked on #GivingTuesday in 2017 (Classy).

Have super supporters schedule tweets that say “I gave to @[YourCharityHere] #GivingTuesday” for November 27, 2018. Headtalker is a great “crowdspeaking” tool to use for this purpose, and you can even get creative with your messaging to max those 280 characters.

Find a cause you care about and donate to it on #GivingTuesday. Never hurts to have good vibes on your side. Tweet about your donation from your org’s page with the #GivingTuesday hash tag and start a pay-it-forward campaign.

Offer an option for donors to repeat their donations on the first Tuesday of every month on your donate form.

Set a donation goal and show users the progress towards that amount. Feel free to raise the goal if donations start pouring in and try to seed early donations to get started (another of our #bonus Giving Tuesday ideas). We like IndieGoGo and Fundly, but you can also fake this functionality by manually updating an image on your site as you hit milestones.

Show a feed of Twitter users who have donated and try to thank each one that donates with #GivingTuesday. What if you publicly thanked every supporter with a custom video released on social? Or made a set of “thank-you” e-cards tied to your organization and Tweeted one at random to each supporter? Or, if you’re strapped for time and design resources, there is a limitless amount of cat gifs out there.

Sometimes it takes money to make money. Play with a small ad spend that remarkets to your email lists, creating a reminder echo-chamber that leads up to the day of giving. Here is our guide to creating a remarketing echo chamber with Facebook and Google Ads. Use Facebook ads and retargetting with a $100 ad that promotes giving through the FB donate system.

Create a Cryptocurrency Donation page that allows your nonprofit to accept Bitcoin and other cryptocurrency. Then join the list of nonprofits participating in BitcoinTuesday. Crypto donations offer a window into a different pool of donors than your traditional audience.

Message existing donors that have given to your nonprofit throughout the year to say thanks a week before GivingTuesday. The purpose of the email is to just genuinely thank them and share a story of impact. Include a subtle ask that, as a past supporter, they share your Giving Tuesday campaign. Learn more about the best practices for thanking your donors.

The other item to highlight among our Giving Tuesday ideas: The only way to #fail on #GivingTuesday is to not measure your results. Create a December donation forecast, then measure total donations for December and on #GivingTuesday. Ask the question: Did we cannibalize giving or increase it?

Of all the Giving Tuesday ideas, the one we want to emphasize is that there’s room for all of them. Don’t worry about crowded messaging: We’re increasing the size of the pie, which means your slice will be larger. Think about how you can collaborate with other organizations in your cause area. Donation averages per charity involved in over the years have stayed relatively even as total charities involved increase each year.

Want more #GivingTuesday tips from the GivingTuesday experts? Watch our 45 minute webinar in which Chief Whaler George Weiner and GivingTuesday’s own Director of Digital Strategy Kathleen Murphy review best practices for setting GivingTuesday goals, devising a strategy, analyzing results, and reporting success to leave you feeling prepared for the big day. Plus, get the presentation deck and all our best GivingTuesday resources at Whole Whale University!